Language and Music and Math: 舉一反三

They're related.
I have a few things to share, as well as a confession to make.
The confession first: I was talking with someone yesterday who's probably going to end up being featured here somewhat regularly as a result of the conversations we have, and we shared a sentiment that I've kind of been thinking about myself with both of my blogs, and it's this. I feel like I can talk about a lot of things at a certain level, describe the underlying concepts, the general idea, and generally help someone else to understand the principles behind something, but I can't actually do the thing myself. For example, I was awful at math in school, like, terrible. But It's been a recent fascination lately, so I've been going through the trigonometry and Calculus lessons on Khan Academy and quite enjoying them. The problem is, I'm actually kind of bad (but getting much better) at the calculation part of the thing. I get the general idea, and can describe it to someone, but once we get down to the nitty gritty, I'm out of my depths. Maybe that can be said for everyone, but I feel like I get it, just not well enough to sit down and calculate stuff. I find Einstein's field equations to be fascinating, but I am decades away from understanding the math behind them. I understand (to some degree) what they represent, but to be honest, that's enough for me. 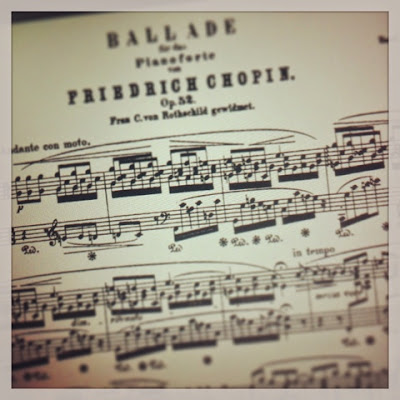 The same is true of music and language. I am not a professional in either field... as an example with music: I'm not a performer of anything, nor can I compose or conduct. I know a great deal more about classical music than the great, large, vast majority of the average population, but still pale in comparison to anyone who's even minored in any related field, so my knowledge of classical music (history, theory, etc.) amounts to an enormous pile of trivia and conversation fodder (aside from the fact that it's just interesting and generally edifying). But again, that's enough for me.
I have practical experience with language, lots of on-the-job(s) training, and 'field experience' so although I'm not a linguist and never learned in a classroom setting (aside from Latin, per last week's article), I've put in a lot of time there. Thing of it is, though, what I'm talking about here is generally all from my personal experience, and as personal experiences tend to be, it's very subjective. In saying that, I am trying to make two points.

That being said, a point in the conversation from yesterday got me to thinking a bit further about what I'd already planned to share today. My original idea was to talk about the strong connection between language and music, or linguistic skills and musical skills. It's talked about often, and I don't currently have any TED talks or thesis papers or studies to link to, but it seems to be one of those things that people just kind of accept (which is not always a great barometer for scientific truth; take for example the "humans only use X% of our brains" myth or the left brain/right brain logic vs. arts categorization). I remember in some of the DVD extras for the movie The Translator
with Sean Penn and Nicole Kidman, there was talk of a UN orchestra because of the number of translators that are musically inclined or have training. (I just did some googling, and) The UN Orchestra is a real thing that exists, and its co-founder and musical director has quite an impressive musical background.
It also just seems to make sense, in a way.
I always seem to find some kind of clarity and principled-ness in oversimplification of an idea to the point of being nearly or actually incorrect about the concept. What are these two skills, and why are they so similar?
They are each nothing more than the use of sounds to convey and communicate ideas and emotions and concepts. Those sounds are produced in a specific way, with specific expression or emphasis, in a specific order, and encode information that the listener(s) hopefully will understand. It's just that one form uses an instrument of some kind, and the other uses a mouth (which, is an instrument in itself, by a different definition of instrument, a means to create sounds).
If there's one thing I could express about the skills necessary to get a language, it would actually be two things. If life were like, a video game where you could walk into a store and buy skills and level up or something, there would be these two things that are critical to language learning, and honestly, everything else is secondary to them, to me.
I think in many ways, the same could be said about music. You have to have a good ear (or it certainly helps), and along with that comes some kind of understanding or practical use of the underlying patterns, ideas, and structures of what's being 'communicated,' but that brings me to another question. Are these skills in the strictest sense? I was talking with someone the other day about the differences in meaning of words like 'skill' and 'talent' in Chinese and English. Perhaps there was another one in the mix, but one seems to suggest something learned by experience or training, while talent seems to suggest something innate, inborn, a gift that many others would feel they can't cultivate. Below is a video I've been dying to share on my music blog, but waiting for the right time. I love this woman's interviews and listening to her thoughts. She's a downright musical genius, and seems like the best kind of person to have a very long discussion with in a comfortable living room with a bottle of wine, and she addresses this idea of 'talent.' Listen to Mitsuko Uchida talk about it.

This video will make an appearance on the music blog in a few weeks, and the topic above is not relevant to language, but I think perhaps the sentiments still apply.
Anyway, the thing that intrigued me most about our conversation (the one with a coworker that I started this long rambling dissertation with), was that idea that 'right-brainy' people and 'left-brainy' people tend to be kind of opposites in their skills: left people are great at logic and math, while right people are artsy and creative (but again, this is really just a myth). It's easy to make the connection then, that language and music are related, but the left/right thing breaks down even further when you consider the very strong relationship between music and underlying mathematical ideas. While not every musician is a mathematical genius, you (or I) also can't listen to really amazing counterpoint, fugues, motets or whatever, and not think of the amazing complexity and detail inherent in those designs. Music is mathematical, and while some people wouldn't consider it music, the total serialism of Milton Babbitt or Pierre Boulez takes this mathematical calculation of music to an even higher level. What then, is the connection between mathematical genius and musical genius? My theory (again, entirely unsubstantiated) is that it all comes back to 舉一反三, the logical analysis and ability to identify patterns inherent to something and derive from them useful information, put that information to use and create or understand something.
Thank you for your time.
Posted by Alan at 1/16/2015