My Purpose (and a call for collaborators)

Perhaps I should be 100% honest.
Most of the content I’ll be posting here (aside from some articles based on TED videos, others included) is stuff I’ve been tossing around in my head for years and years. In a frenzy of writing about two years ago, I finally vomited it all out onto paper with reckless abandon and complete disregard for flow, order, structure, repetitiveness or cohesion, and with some other stuff I didn’t include and other material I was working on, came to around 40,000 words.
I would love to be a published author. It would just be one of those things I'd like to be able to say I've accomplished, but to be honest, I'm not willing to go through all the trouble just for bragging rights. But I think I have good information, and so I decided I can share it here. And this is what it is.
I've studied all sorts of languages for all sorts of reasons. I can't say with any sincerity that the attention I gave to Hungarian, Albanian, Urdu, Farsi, Indonesian, Wolof or a host of others was in hopes of actually being able to speak any of them. I knew it wasn't. However, I knew how to go about a very short-term, specific, sort of concentrated study of a language for the short term goal at hand, be it for an English lesson, a single conversation, or just a conversation starter. Virtually none of that has stayed with me, and I've forgotten almost everything I'd learned to speak, except for a few key words, but the majority of the background about the language, some of its structure, personality, and features are almost all still clear. They aren't of any use when looking to speak the language, but if I had to try to identify a language, or read some bit of it, or guess the origin of a surname, it would still come in quite handy.
Then there's the languages I really tried to learn to speak, with varying degrees of devotion and success. I speak Chinese fluently, and then there's my other endeavors: Russian, Italian, and Thai, primarily, with other less devoted endeavors like Turkish (more of the above group, really, since I never really got close to speaking it at all, but intended to) Spanish, French, German, Norwegian… But sadly,
what remains of those are perhaps some basic words and phrases and a few good excuses. In almost all of those, I can at least say something like “I studied some (language) by myself (because I had a friend from…..) who taught me, but I haven’t any chance to speak it now, so I’ve forgotten everything.” And that’s it.
There is absolutely zero substitute for real live practice, and ideally practice coming in blind, not a canned, rehearsed conversation with a script or anything pre-prepared, but a real live conversation like you’d have if you bumped into a stranger on the street. That’s the real stuff. And since I’ve not got that, many of my endeavors, no matter how inspired, are limited. But I want to change that, and I know how. I just need to use what I’m studying, hence the previous articles on necessity.
But back to what was going to be a book: I’ve decided to avoid the hassles of publishing and go this route. And what is the book? It is an attempt to construct, to fabricate, to design a plan for the learning of any language by any person, or my quest to see if this is even possible. Different students have different mother tongues with different ideas and goals and abilities and ways of thinking, and this is obviously problematic for a one-size-fits-all approach. But can there be a modular, sort of all-encompassing approach, the details of which could be fine-tuned to suit every situation? I have an approach like that for sure, but I’ve always done it that way, and it just feels right for me. It’s how I think and how I prepare and how I approach language study. My approach and thought process may be very different from the way many others approach it, and let me show you why. 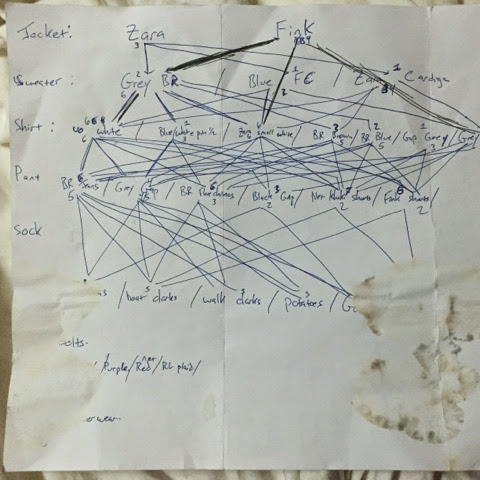 I actually just now thought of this. This is a diagram I made about five years ago in preparation for a trip to Italy. I wanted to make sure that I packed as efficiently as possible and that as much of what I was bringing matched with as much as everything else so I wouldn’t have to pack too much. It is also probably worth mentioning at this point that I am mildly colorblind, which adds another layer of difficulty to the equation. In any case, this is how I tend to approach things, and it may be that I’m a more analytical thinker (or ‘overanalyzer’ perhaps) than some, but I’ve always found that a little more time spent preparing helps to avoid wasted time or efforts later down the road, so I tend not to take shortcuts.
In any case, this blog is an attempt at honing this approach, trying to zero in on what works the best for the greatest number of people, and then making it work better for those people it doesn’t work well for. I have tons and tons of thoughts about this and am eager to find willing participants to give it a try and perhaps do some communicating, get feedback, and collaborate on some stuff.
我也打算慢慢來準備些中文的內容，不過目前所寫過的都是英文的資料。畢竟住在台灣， 中文的文章也該比英文受歡迎。。。吧. Anyway, we’ll get to that later, and I’d like to have lots of other languages, contributors, collaborations, guests, interviews, anything. So that’s what I suppose there is to look forward to here.


I’d kind of like to have some more traffic first before I start getting around to writing/sharing the real meat of my ideas; not sure when I’ll start pumping all that out. We. Shall. See.
Posted by Alan at 12/24/2014